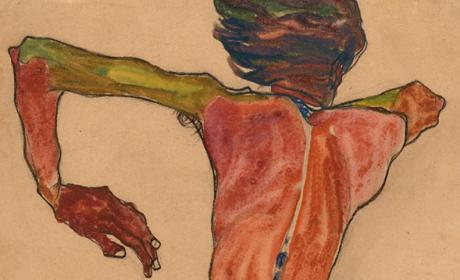 This exhibition considers the shift in treatment of the human figure in the early twentieth century through a selection of works on paper from Austria and Germany. Traditionally the nude had been presented in an idealized fashion. Proponents of the late nineteenth-century Symbolist movement in Europe were among the first to offer near caricatures of the nude, often imbued with psychological undertones.

In Austria, Alfred Kubin’s disturbing drawings are macabre in their nightmarish visions, coupling sexual perversion with ghastly scenes of death. In the early twentieth century, Gustav Klimt, drawing inspiration from the work of Auguste Rodin, challenged taboos of the day through his allegorical depictions of nude pregnant women and the elderly, vulnerable in their frailty. A subsequent generation of Expressionist artists, such as Richard Gerstl, Egon Schiele, and Oskar Kokoschka, explored other forbidden topics, including the male nude. Among Schiele’s most powerful works are his brazen nude self-portraits. Schiele also made almost clinically accurate nude studies of young children, seeking a fresh approach through working with untrained models.

Similarly, German Expressionist artists admired the innocence of youth and employed child models. They were equally drawn to non-Western art, spending time studying and collecting art from Africa and the South Pacific, believing these so-called “primitive” works were imbued with a greater sophistication and honesty than most contemporary European art. Members of the artists’ group Brücke, for example, even moved the nude from the comfortable studio space to more natural al fresco settings in response to the so-called Lebensreform (life reform) social movement, which espoused a back-to-nature ethos of nudism, free love, and healthful living.

The show is organized by Janis Staggs, Director of Curatorial and Manager of Publications at Neue Galerie New York.